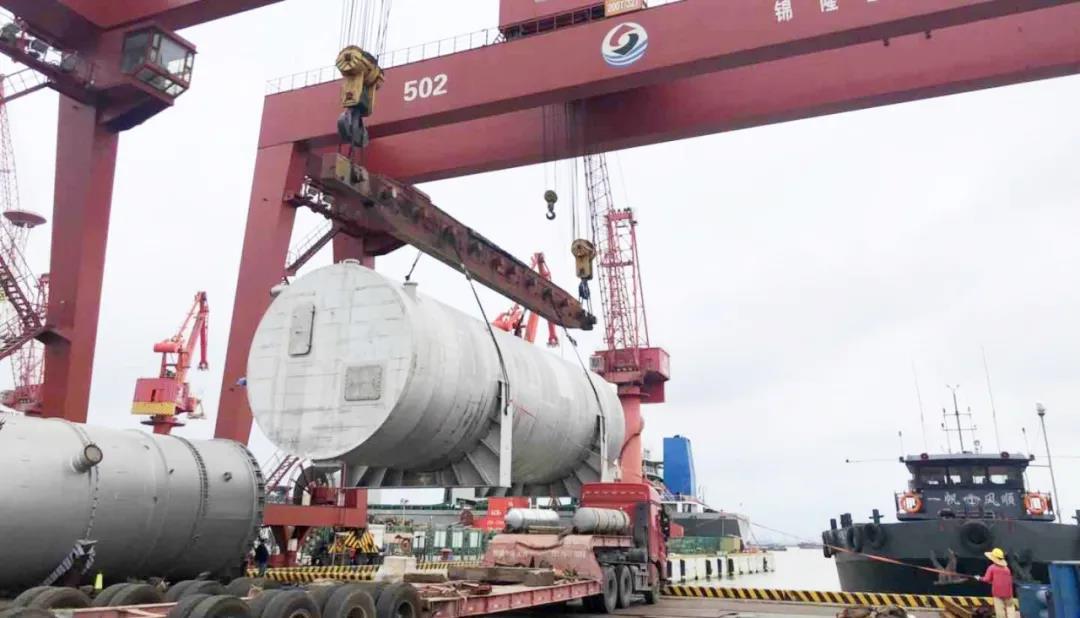 Recently, two 300m3 LNG (liquefied natural gas) bunker fuel tanks designed and built by Zhangjiagang CIMC Sanctum Cryogenic Equipment Co., Ltd. ("CIMC Sanctum") under CIMC Enric were delivered for shipment. It was reported that the two fuel tanks would be used in the 16,300-ton dual-fuel chemical ship owned by the Swedish shipowner. So far, CIMC Sanctum has delivered 14 300m3 LNG bunker fuel tanks to the shipowner to help reduce the exhaust emissions of ships.
In October 2019, CIMC Sanctum signed a contract with Germany's TGE Marine to design and manufacture four 300m3 bunker fuel tanks for the 16,300-ton dual-fuel chemical ship series of the Swedish shipowner. The two tanks delivered this time will be used for the shipowner's 7th ship of the same series. The remaining 2 to be delivered by the end of October will be used on the No.8 ship in the series by the shipowner. This is also the first time that TGE Marine has subcontracted its vacuum fuel tank business to a Chinese tank manufacturer.

It was reported that TGE Marine, as the world's leading contractor for ship and marine cryogenic gas systems engineering and a pioneer in LNG floating storage and processing industry, after more than 2 years of survey and evaluation, highly recognized CIMC Sanctum's strong comprehensive strength in the field of LNG marine equipment, and finally chose it as the integrated supporting manufacturer for the vacuum tank project in China to jointly complete the general contracting of FGSS system (Fuel Gas Supply Systems) for this project.
In fact, CIMC Sanctum's rich construction experience and stable and reliable product performance have long been recognized by the Swedish shipowner. It was learnt that, in addition to the No.7 and No.8 dual-fuel chemical ships of the 16,300-ton series owned by the Swedish shipowner, a total of 12 LNG bunker fuel tanks (300m3) for No.1 to No.6 ships that have already been put into operation were all designed and built by CIMC Sanctum.
Up to now, with its excellent quality and strong comprehensive strength, CIMC Sanctum has provided more than 30 sets of bunker fuel tanks with different volumes to internationally renowned enterprises such as Kongsberg Maritime, MAN Sweden and Wärtsilä, contributing to the reduction of ship exhaust emissions.