Thumb-up by Chinese Premier, the world’s most advanced ultra-deep water drilling platform manufactured by CIMC has been named and delivered 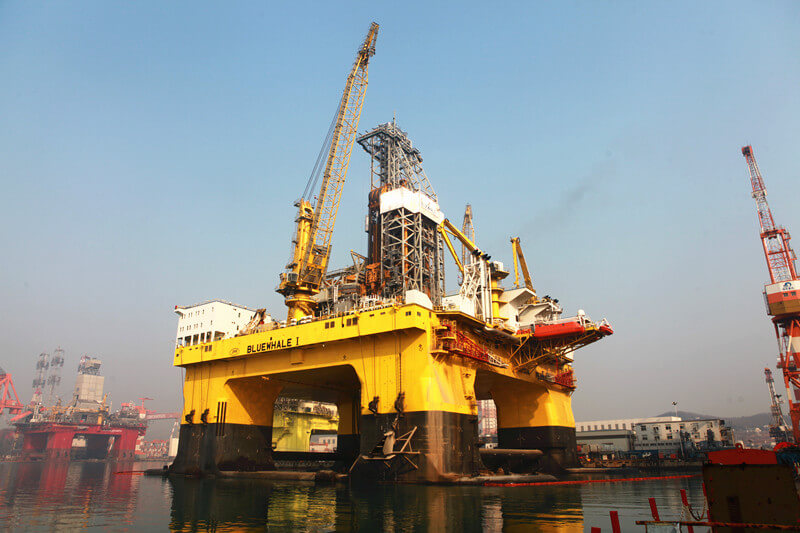 “Blue Whale One”, a semi-submersible drilling platform manufactured by Yantai CIMC Raffles Offshore Limited (CIMC Raffles), was named and delivered to the project owner at Yantai on February 13, 2017. Equipped with two drilling towers, the platform is the most advanced semi-submersible drilling platform on earth, breaking the world’s records for the operating depth and drilling depth. In the meantime, it is the first “turn-key project” completed by a Chinese shipbuilder in the ultra-deep water field, making it a milestone in the nation’s offshore engineering sector. The platform will be jointly operated by Blue Whale and CNPC Offshore Engineering Company Limited (CPOE) for ocean energy exploration according to a previously signed service agreement between the two sides.

“Blue Whale One” is another “turn-key project” of CIMC Raffles. The EPC contractor completes all the activities from design, procurement, construction, to commissioning and handover of the project to its owner. The project successfully passed CPOE’s safety operation management system certification and was immediately put into operation after the handover. CIMC Raffles incorporating Frigstad D90 in the basic design of the project, and completed all the detailed designs, construction engineering, building and commissioning. The platform is equipped with the DP3 dynamic positioning system and meets the certification requirements of Det Norske Veritas. With a length of 117m, a width of 92.7m, and a height of 118m, the platform features a maximum operating depth of 3,658m, a maximum drilling depth of 15,240m, and it is a semi-submersible drilling platform with the greatest operating depth and drilling depth in the world, suitable for deepsea operation across the world. Compared with traditional single drill tower platform, D901# drilling platform is equipped with highly efficient double hydraulic drill towers and Siemens closed-loop power system, capable of improving the working efficiency by 30 percent and saving fuel consumption by 10 percent.

The platform successfully won the Best Drilling Technology Award from the World Oil in 2014 and the Best Design Highlight Prize from the OTC in 2016. In particular, when Chinese Premier Li Keqiang visited Chinese Equipment Manufacturing Industry Exposition in Brazil in May 2015, he had a close look at the model of “Blue Whale One” and thumbed up for it.

“Blue Whale One” embraces 27,354 working units, over 40,000 pipelines, and more than 50,000 MCC report and inspection points, and especially its electric cable has a pull extension length of 1.2 million meters. As the world’s most advanced ultra-deep water double-tower semi-submersible drilling platform, it not only surpasses other projects in terms of the physical quantity, but also has overcome a great many of challenges including the solution to technical difficulties, project management, global procurement and practical working and application performances.

Thanks to the concurrent implementation of detailed designs and basic designs, CIMC Raffles completed the platform design within 9 months, 3 months ahead of the standard design period. During the building of the platform, the shipbuilder used the ultra-thick NVF690 steel plate with a thickness of100mm for the first time and takes the lead to complete the CTOD test in the world, making CIMC Raffles the one and only shipbuilder on earth to complete the CTOD test and possess the ability to conduct such welding and production. CIMC Raffles also uses the lean management method of “overall every control and clear” for the first time, which accelerated the construction progress by 15%. Throughout the construction process, CIMC Raffles has been adhering to the “zero injuries” safety target, protecting the vocational health of construction staff and caring about the environment, and has created the safety record of zero injuries for successive two years, which has gained good comments and recognition from the ship owners and inspection authorities.

The drilling system of “Blue Whale One” incorporate a large number of cutting-edge technologies such as two drilling towers, hydraulic lifting, shale recovery, and ultra-high-pressure well control. For the first time, CIMC Raffles has got deeply involved in the key processes of the drilling platform construction including the design, unpacked procurement, installation of equipment, MC and commissioning, and completed a larger part of independent designs and fully independent construction and drilling commissioning, signaling that CIMC Raffles has successfully gone through all EPC processes of deepwater semi-submersible drilling platforms.

“Blue Whale One” is the ninth deepwater semi-submersible drilling platform that CIMC Raffles has delivered, which has further enhanced its abilities of batch deliveries in the semi-submersible drilling platforms, and cultivated a team of high-caliber project management and implementation talents. CIMC Raffles will continue to contribute to the implementation of China’s deepsea strategy and provide more high-quality and cutting-edge deepsea equipment for the nation’s ocean energy development.