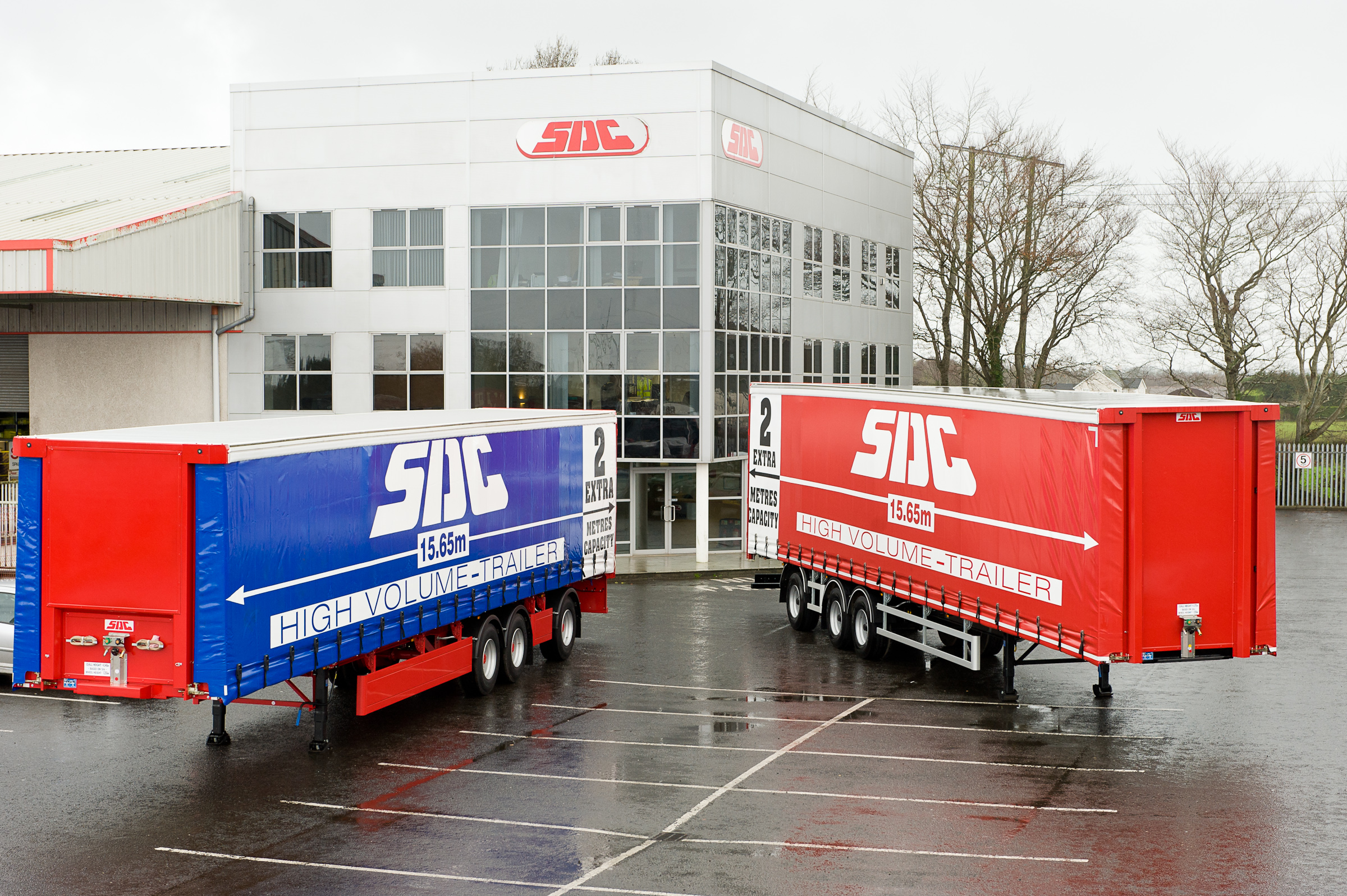 China International Marine Containers (Group) Ltd. (“CIMC”) announced that it has solely taken over the Retlan Manufacturing Limited (“Retlan Group”), a UK’s leading semitrailer manufacturer and owners of SDC Trailer and MDF Engineering, at £91.7 million (over 800 million yuan). Thanks to the deal, the biggest in the global semitrailer industry in recent ten years, CIMC will be able to extend its reach into the UK’s market, expand its business into Europe, and retain its position as a semitrailer world leader.

The mega-merger was concluded between CIMC Vehicles, the second largest business segment of CIMC, and Retlan Group, one of the largest manufacturing businesses in Northern Ireland. According to Li Guiping, General Manager of CIMC Vehicles, the Retlan Group is a specialist in the production of semitrailers such as flat transport semitrailers and curtain-side semitrailers; it has production plants at Antrim in Northern Ireland and Nottinghamshire in England and employs nearly 1,000 staff members. CIMC Vehicles finds close connection in business with the Retlan Group, which will complement to CIMC Vehicle’s semitrailer business portfolio in the UK with its advantages in local markets. The purchase talks started in June 2015.

Deloitte & Touche, GTM and McKinsey & Company, parts of the world’s first-class taxation and operation firms engaged by CIMC vehicles to conduct necessary investigations to finalize the deal, reported that in addition to good quality assets, the Retlan Group has been trading successfully in recent years. It achieved sales revenue of £198 million and profit of £14 million for latest financial year. Before the acquisition, JJ Donnelly and his family held a large share in the group, while CEO Mark Cuskeran also owned a certain proportion.

People might be perplexed and feel curious about why a company with such brilliant performance will be sold out. However, Li Guiping said that the owner of the group has made a right decision. The majority shareholder from the JJ Donnelly family is about to retire, but the heir refuses to continue running the business. Therefore, it is a smart choice to sell the group when it is making profits. In the meantime, CIMC’ leading position in the global semitrailer industry has reassured the majority shareholder about the company’s future development and the employees’ well-being. Mark Cuskeran, CEO of Retlan Group, together with other management team members, has been impressed by the approach of CIMC Vehicles to the acquisition, believing that the acquisition is an important step forward for the Retlan Group and a significant opportunity for the company, its staff and for the future.

The business talks went smoothly, and the deal was finalized recently. The purchase cost CIMC Vehicles more than 800 million yuan, but Li Guiping commented that the deal was worth a lot more, and it is an acquisition of best overseas assets in recent years and will mark an exciting new chapter in CIMC Vehicles’ history.

Indeed, the acquisition is of significant importance to CIMC Vehicles, which is seeking to put the global strategy into practice, and to CIMC, which aims to transform and upgrade its business growth patterns. CIMC Vehicles ended its 2015 with an amazing 10 percent market share and the first place worldwide, but the result did not satisfy Mai Boliang, the president of CIMC. He pointed out that the major buyers of semitrailers were from Europe and America, so if CIMC could not make it to the top three on European and American markets, its ranking was not that convincing.

After CIMC ranked the first place for its output of containers in 1996, the management teams began to explore the ways to transform and update its business growth patterns in an attempt to stay alert to and avoid the periodic risks of global trades. The management team once saw trailers abroad and considered them to be wheeled containers. The trailers were closely connected with CIMC’s existing business and could overcome the disadvantages of China’s road transport vehicles, for example, the overloading issues. Also, the market survey indicated that the trailer market capacity was nearly as much as four times of that of containers. Therefore, they finally decided to switch to the trailer business. In 2002, CIMC formally started its production and sales of road transportation vehicles after absorption and renovation of foreign advanced trailer technologies.

It was later proved that the trailer was not so simple as to install wheels to containers, but CIMC has made enormous strides. At the beginning, its sales revenue amounted to millions of dollars; in 2010, the turnover jumped to $16.6 billion, which established the trailers as the second largest business segment of the group. In the face of global trailer overcapacity, CIMC coped with the problem by reducing its production and focusing on quality growth, and its trailer business remained to be profitable despite the wide-spread gain loss in the industry. In 2015, CIMC ranked the first place in the world for group turnover of $12.8 billion. During this process, the group has been sticking to the policy of “global operations, local knowledge”. Being able to satisfying the demands of local customers, CIMC entered American, European and emerging markets, and seeks business growth on a global scale through a series of acquisitions. Vanguard, the American company purchased in 2003 has become the company of CIMC Vehicles with the greatest earning power.

However, CIMC Vehicles’ plan to localize the production in the southwest of Germany, the central part of the Continental Europe, was frustrated by the soaring “Made in Germany” at the beginning. In this case, CIMC Vehicles temporarily terminated its business in Germany in 2014. Afterwards, it tactically penetrated the European markets with the help of its previously acquired LAG in Belgium and through the setup of a production plant in Poland. After the successful acquisition of the Retlan Group, the three positions, geographically in a triangle shape, will be complementary to one another, which will bring CIMC Vehicles significant business growth on a European scale and put it in an advantageous position.

It is noteworthy that the acquisition took place at the time of Brexit referendum. Though the Britain’s departure from the European Union is totally unexpected for most of the media outlets worldwide, CIMC’s acquisition team said that they have made full preparation for the outcome during the purchase process. In the long run, Brexit will impose no obviously adverse impact on the acquisition, the consolidation between the two groups and on further implementation of CIMC’s European strategies.

Li Guiping said that CIMC Vehicles will continue to make intensified efforts to improve its global presence. At present, the group’s resource allocations on American, European and emerging markets are able to minimize the risks of exchange rate fluctuations, an approach that CIMC has developed and proved to be effective. Mr. Li was optimistic about CIMC Vehicles’ future on the UK’s markets: “even if the British pounds depreciate by 10 percent, it is in our hands. To some extent, the depreciation will benefit export sales of the UK-based company to other European countries, North Africa, and the Middle East.”

CIMC’s resolution to seek business growth and expansion in Europe will not be shattered by Brexit, but it may make necessary strategic adjustments and adapt to local customers’ demands with more accurate market strategies. Previously, a stand-alone company may serve a larger area in Europe featuring regional market integration, but in the future, the European markets may become more differentiated. “A differentiated market means considerable challenges for China’s enterprises, and only those capable ones will be the winners in the fierce competition. CIMC’s excellent track records in pursuit of globalization will do good to us. I am confident that for CIMC, a differentiated Europe means an opportunity instead of a tragedy”, Mr. Li Guiping.